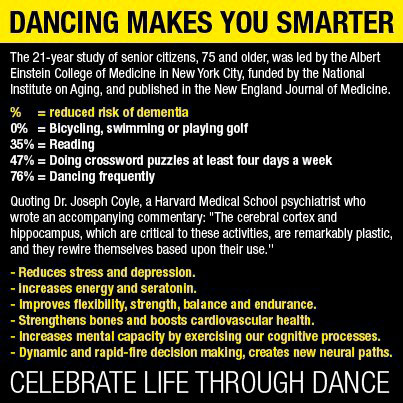 For decades doctors and scientists have talked about the health benefits of dancing but these studies have typically promoted the benefits of dancing as a physical exercise. Now recent research suggests that not only is dancing a great method for stress reduction and promoting a sense of well-being, but dancing can even make you smarter!

While many activities such as reading books, doing crossword puzzles and playing musical instruments were beneficial to the brain not many physical activities such as playing golf, swimming or bicycling offered the same mental benefits. There was only one activity that combined the physical and mental benefits and offered protection from dementia – and that was dancing!

The study by the Albert Einstein College of Medicine revealed that dancing has a positive effect and can improve the health of the brain. The study specifically measured four factors as they related to dancing:

The study found that dancing frequently was the best activity for maintaining both mental and physical health. Dancing seems to incorporate several brain functions that stimulate the brain and provide a sense of well-being. Some of these functions include listening to enjoyable music and creatively thinking and coordinating your dance moves with your dance partner. When someone dances, they are improving their mental capabilities. And by keeping the brain active, the brain’s health can be maintained which makes one smarter and less likely to lose memories.

How does dancing make you smarter?

It appears that the cerebral cortex and hippocampus of our brains are very elastic which means that they can rewire themselves. By utilizing our brain in coordination with our body, dancing helps keep the brain functioning by rewiring itself and keeping brain pathways open. This combination of creative thinking and physical activity also promotes serotonin levels which elevate our happiness and reduces our stress levels. Dancing simply seems to stimulate the brain in a constructive way that helps to maintain brain health and make the brain less likely to lose memories. Dancing is a fun and engaging mental and physical challenge which stimulates neural pathways in the brain for long-term brain health.

So there you have it – dancing, which is so much fun, is also is a great way to work out the brain and body, reduce stress and keep those brain cells and neural pathways active! See you on the dance floor.