Why Ballroom Dancing Is Cool Again

(I found this interesting article on the ABC News website.) 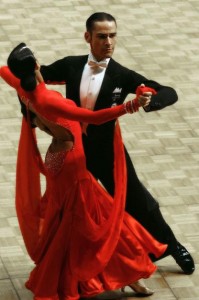 Ballroom dancing no longer means stepping on someone’s toes at your cousin’s wedding.  What was once considered stodgy has become sleek, sexy — even cool.

ABC’s “Dancing with the Stars,” originally a summer series, became a surprise blockbuster –19 million viewers tuned in last week.  All over America, people are putting on their dancing shoes and changing their lives.  And the show is giving the dancers, some of them called B-list celebrities, a career jump-start.

One of last season’s stars, John O’Hurley, now has a full dance card.  He’s on Broadway, playing the lead in “Chicago.” He credits his terrific tango with his new lease on life.

“Well, it certainly has helped,” he said. “And it accounts for the size of the paycheck, I’ll tell you that.”

Tatum O’Neal, voted off in a tearful moment early in this season’s competition, didn’t have to cry for long.  She popped up on “Entertainment Tonight” with a new gig as an entertainment reporter.

And then there’s Master P, a last-minute fill-in for his son, rapper Lil’ Romeo, who was injured while playing basketball. The judges knew he couldn’t dance, but viewers kept on voting him back. He is suddenly a crossover household name.

Katrina Szish, an editor at Us Weekly, said that viewers can relate to these celebrities — stumbling and klutzy at the beginning, elegant and graceful at the end.

“The celebrities are the surrogates for us.  They’re actually the guinea pigs for us,” Szish said.

Partner dancing has been sneaking up on us. The 1992 movie, “Strictly Ballroom,” won a top prize at the Cannes Film Festival and breathed life into a pastime many thought of as stuffy and out-of-date.

Many say the revival gained momentum two years ago with the movie “Shall We Dance?,” starring Jennifer Lopez and Richard Gere. In “Mr. and Mrs. Smith,” Brad Pitt and Angelina Jolie’s steamy dance shows ballroom is definitely not for sissies. And then there is the recent documentary, “Mad Hot Ballroom,” about a dance competition for inner-city, public school kids in New York City that has audiences rooting for the underdogs.

“We’ve seen sort of a pop cultural collision of interest in ballroom dancing,” said Szish. “It works sort of like fashion trends. Somehow everybody around the world suddenly decides this is it, this is the trend.”

Arthur Murray, one of the oldest chains of dance instruction studios, said enrollment is up 30 percent, on top of a 15 percent rise the year before.

Even college kids are figuring out the appeal of dancing with a partner — both the rules and the romance.

Shira, a member of the ballroom dance team at Columbia University in New York, said, “You’re actually in contact with another human being. There’s something really satisfying about that.”

Yev and Rachel, also members of the team, became a couple on and off the dance floor.

“I think we’re living in really challenging times, there’s a lot of political dissent in the country and political division,” she said. “Ballroom dancing… makes people feel secure. I think it brings people to a place that makes them feel safe and …civilized.”